Welcome to rockabilly! What is rockabilly? Well, first of all you should not confuse the term "oldies music" or 1950's hits with authentic rockabilly music. Rockabilly was a style of music that emerged in the 1950s in the mid south of the USA when country (or hillbilly) music was mixed with rhythm and blues. When you consider that the popular country or hillbilly music of the mid 1950's was heavily influenced by gospel and bluegrass, and at the same time rhythm and blues was a mixture of traditional blues, big band swing, and jazz, well, you get the picture, it involves all of the great American music forms in a really cool way, and with a non-stop kickin' beat.

Some of the early rockabilly sounds came straight out of Memphis Tennessee, and the Sun Record label with artists like Carl Perkins, Elvis, Scotty, and Bill, and Jerry Lee Lewis. Other pioneers of the rockabilly sound were Gene Vincent, Johnny Burnett and the Rock 'n' Roll Trio, Johnny Cash, Bill Haley & The Comets, Roy Orbison, The Everly Brothers, Chuck Berry, Eddie Cochran, and Buddy Holly. Rockabilly music came back in a big way when the early punk rockers discovered the raw energy and uncompromising sound. The Stray Cats, the Blasters, and later on Reverend Horton Heat, and Big Sandy and the Fly Rite Boys (in the 1990's) came out with a new version of Rockabilly. It's now a universal form of music and there are great rockabilly bands coming from every corner of the globe, along with rockabilly music festivals in England, Spain, Finland, Japan, South America, Italy, and just about everywhere else.

Rockabilly is one of the purist forms of American roots music, and has been credited as being the launching pad of rock 'n' roll. One of the things that is really cool about rockabilly is it is a guitar driven music style with the guitar being way out front. We can thank some of the early pioneers of Rockabilly guitar for that, great guitarists like Scotty Moore (with Elvis Presley), Cliff Gallup, (with Gene Vincent and the Blue Caps), Paul Burlison (with Johnny Burnette and the Rock 'n' Roll Trio), and Duane Eddy just to name a few. 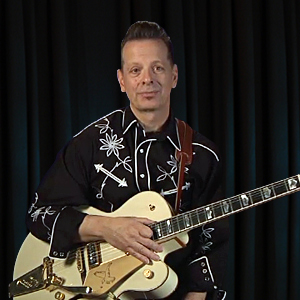