Bring It On Home to Me

After our third verse, we will switch on our octave effect and replicate the 12 string, electric guitar solo you hear in the original recording. This solo features an awesome repetitive motif that includes some deceptively simple melodies.

Played over our verse changes, the solo is a series of melodies using our octave effect. The first two bars start on the & of 4 with a melody that outlines an Emi chord. You will then use D on your A string as a pivot note, followed by a resolve to A on your G string which works over the D7 chord and ends the first part of our phrase.


Then for the next few two bars we stick to the same pivot note on D moving up the Emi arpeggio and resolving to D an octave higher, starting on beat 3 of the previous measure. We then do a chromatic melody from D to Eb to E which takes us into the C chord.


Next, we start into a pretty quick sequence of notes that pivots off of D, on our A string. The first two rounds go back to D, while the third resolves to C which goes over our C chord. We then follow that with a melody on our D string, then resolving to and letting it ring over the last two bars.

Then the rest is easy! Simply play the same melody moving from D to E to G, and then sneak in a quick D on beat 3 before you get back into the next verse.

If you just want to play chords over this part, just play the same open chords as our verse. 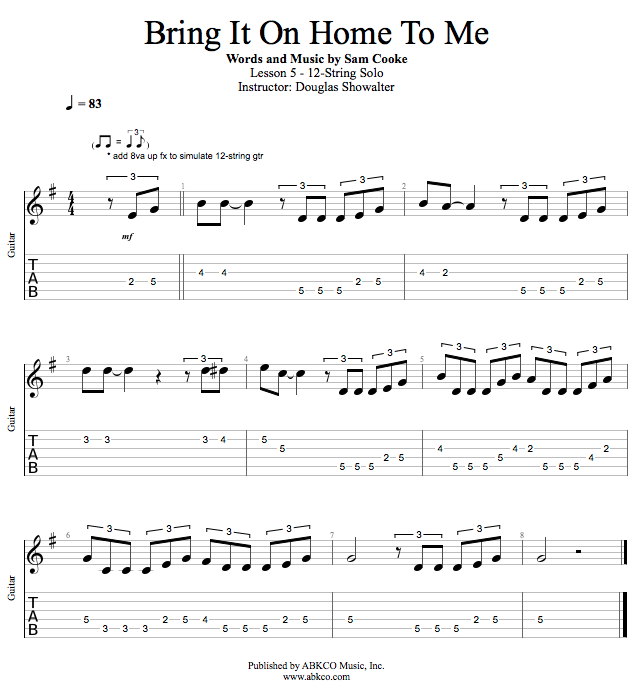 Instructor Douglas Showalter
Artist: The Animals
Song: Bring It On Home to Me
Difficulty:

Bring It On Home to Me