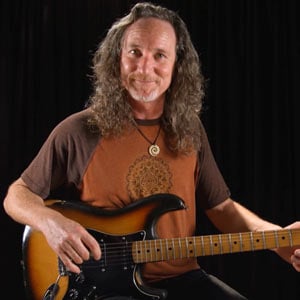 Tom picked up the guitar when he was 12 and never put it down. In addition to his roots in classic rock, he has studied classical guitar and jazz, and is influenced by funk and latin. He has toured all over the world and performed alongside artists like Joan Baez, Norton Buffalo, Randy Vincent, Mel Graves, Steve Smith, and Kai Eckhardt.

Tom's formal training includes over ten years of study in music theory, performance, and education at Mills College, Sonoma State University, and College of Marin. He has taught music for over two decades and is our go-to guy when it's time to shoot classic rock songs.